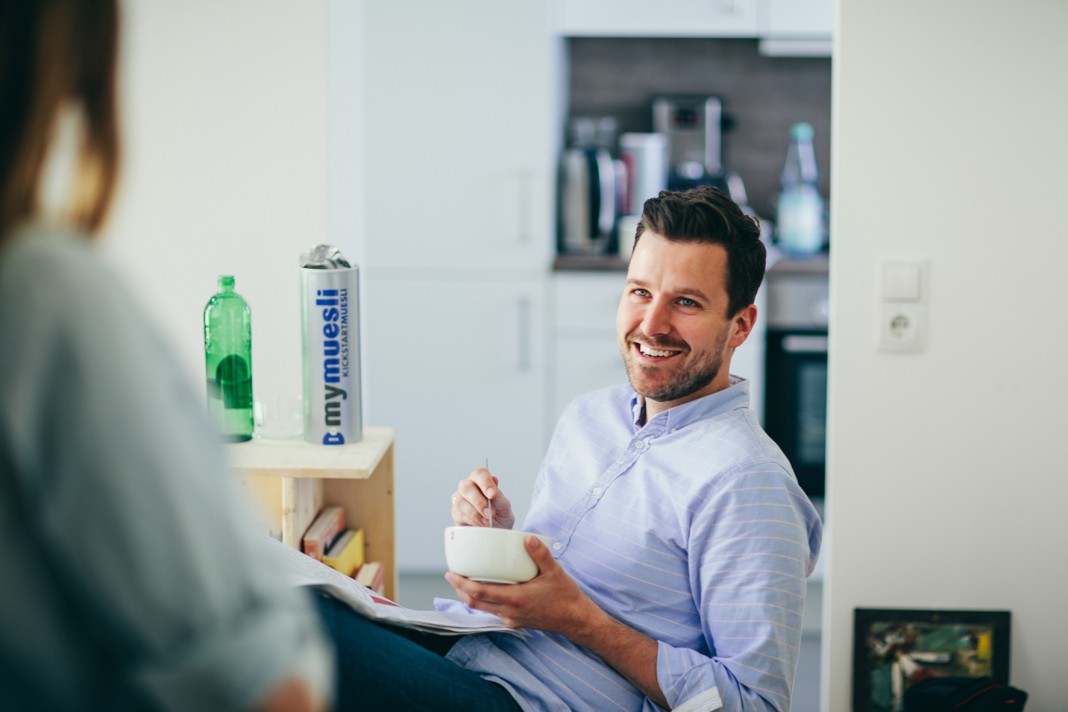 Max, since your company went online in 2007 some time has already passed by and much has been written about mymuesli’s success story already. Yet, would you mind to give our readers a glance at how everything at mymuesli started and evolved into the company it is today?

We started in 2007 as you already pointed out. Back then we simply wanted to bring the concept of mass customization to muesli. But a lot has happened since those early days: More than eight years later mymuesli is available in five countries, operates 30 very own mymuesli stores in prime locations and our products are featured on the shelves of supermarkets and cafés  – either in the classic 575g tubes, as mymuesli2go or even as a muesli drink. We’re still amazed at how fast these years went by and how rapidly our business grew. As for the how: That’s of course a complex question. Let me just say that it was solely possible because of a great team of close to 600 people as of today.

Please tell our readers a little bit more about your business model and company. What makes it special?

The products of course. The people. And our unique business model incorporating mass customization as well as multi channel distribution.

Before you started to offer customized cereals you tried to evaluate the market for such products through a survey. Please tell us about the survey, its rather demotivating results and its motifs one more time. How did you react and why?

I am sure most readers are familiar with the often dreadful experience of receiving a questionnaire via email: It’s supposed to take only 3 minutes, but after 30 minutes there are still ten questions to be answered. Ours was just like that (laughs) and hidden beneath lots of other questions we asked: “Would you buy muesli online?” Nobody checked “Yes”. Quite an encouraging result. But we said to ourselves: When those people see the final product, they’ll be amazed. Let’s do it anyway!

As you said the results of the survey back then were not a good omen for the success of customized cereal. You implemented your business idea anyway and did so quite successfully. In many industries customization is still behind. What do you think is preventing more customization? Simply too little people with guts to risk it or are there different factors involved?

Hard to say. Could be lots of things. But most importantly people should follow their gut feeling. And if they’re dedicated enough they’ll most probably succeed.

Back then, you basically ignored the survey and pushed for customizable cereal. Can customization only succeed if customers are simply faced with the option or did you have specific reasons for pushing customizable cereal? Did you feel like there had been a trend for individualization back then already?

Yes, we were aware of mass customization or MC and a trend for individualization and the vast opportunities that the Internet had to offer for new mass customization business models. In our case the concept of customizing muesli really was revolutionary – to the point that many thought of mymuesli being a joke. But nevertheless our USP was and is quite strong. After all, who wouldn’t want the perfect breakfast?

How do you rate the demand for customization today? Is demand for individualization and multi-optionality still on the rise or already sounding the retreat? What indicators do you sense?

I am no trend scout, but new technologies like 3D printing will push the boundaries of individualization and mass customization business models. I think we’ve only witnessed very humble beginnings. The best is yet to come!

You did increase the amount of predesigned products that are buyable in supermarkets contrary to the cereal customization online as well as opening mymuesli stores in more than a dozen cities located in Germany, Austria and Switzerland. Maybe you can tell us a little bit more about aforementioned multi-channel strategy. Does that mean online demand for customizable cereal is already mature or what are the reasons behind it?

Customizing in a supermarket or in a store is not only difficult in terms of logistics, but also the super high quality of the final product is much easier to maintain when there’s only one workshop or “manufacture”, as we like to call it, as opposed to mixing in every outlet. That said our offline concept required predesigned products, also because that’s what people love: Being able to shop a pre-mixed muesli, maybe customizing another one online at home, and then coming back to the nearest mymuesli store to pick it up free of delivery charges. It’s all about convenience, at mymuesli you’ll find the muesli that works best for you, either because you chose all of the ingredients, or because we manufactured it for a special target audience. But coming back to your question: mass customization is and always will be a pillar of our business.

Critics of individualism often suggest that individualization always simply results in new mainstream trends. The „hipster beard“, now decorating almost every second face in Berlin, could be an example. How do you assess this thesis intuitively?

While assessing this question I am carefully stroking my Berlin-Kreuzberg beard. But honestly? I think that’s bull… very untrue. Of course individualism will foster mainstream trends. But seeing the names our customers pick for their mueslis for example, I don’t think that most of them will be trending online some time soon.

Surely you have access to statistics about preferred cereal ingredients. Do these statistics pose an empirical prove for said thesis or how different are people’s preferences today? Might your standardized – non customized – cereal products even be an answer to the mainstream that may be the outcome of individualization?

We’ve analyzed more than 100.000 mymuesli orders. Only 42 mueslis were identical. That proves two things for me: First, Douglas Adams was right after all. Second, people are truly different.

Could you tell us the most commonly picked ingredients, the most popular cereal? Would you give away your favorite?

The three of us test lots of new mueslis, therefore we never truly have a favorite. As stated previously customers love all of our ingredients, but of course there are top picks like Oats or Strawberries. But I don’t want to influence people too much with this data.

Today you are not solely offering cereal and porridges but also tea. Where is mymuesli heading next? What would you personally want to try out some day and why?

It’s been an amazing ride these past years. And we’re full with new ideas. But right now it’s all about staying ahead of our Christmas business. And then we’ll see.

Is it the basic product, the cereal, or the customization that excites you most? What makes it exciting? What is the best part about being an entrepreneur and leading your own business anyway?

Having a physical product, not just a social network for example, makes a huge difference I think. It’s incredibly motivating. But it’s the combination of all the things mentioned before. And on being an entrepreneur: having the ability to shape your own future and watch a dream come true. That’s marvelous, almost as good as starting a family.

Many industries are not offering broad customization. Cars, clothes and, since mymuesli came up, cereal are the three main products that come to mind. What do you think hinders the success of customization? What product would make the world a better place if it were customizable?

Tough question. I think if you find the right craftsman almost everything is probably customizable these days. The key is to get the word out and find the means of making it affordable for a lot of people; otherwise your target group might be very limited. But honestly: the sky’s the limit, I cannot say where this will or should stop. But in addition to individualizing our lives and lifestyle we should also think about society as a whole and about what’s good for everyone: At times altruism is not such a bad idea, too.

Mr. Wittrock, honoring your entrepreneurship, you and mymuesli won the German Founder’s Award (Deutscher Gründerpreis). Many young entrepreneurs aspire to achieve similar success. What advice can you give to these young people?

The three of us were really lucky: in finding each other and in succeeding with our very first idea, so we haven’t learned the hard way: through failure. Of course we failed numerous times in building our business, but we didn’t have to start from scratch lots of times. But I guess if you’re just starting out that’s what you have to be prepared for: standing up, falling down, and standing up again. If you stay hungry you will succeed. I promise.

You have said before, being different is the key. Why should that be so important for today’s generation?

I’d like to answer with a quote from Mad Men, by Don Draper: “It’s about sticking out, not fitting in”. Otherwise no one will notice your products if you’re an entrepreneur.

You founded mymuesli together with two close friends. What is the key to team chemistry in a company? Has your close friendship also been an obstacle for doing business at times?

Of course there have been obstacles at times. But trust is incredibly important among business partners. And we trust each other 100 percent.

In the German speaking area, too little risk taking is often criticized. This might be a cultural, but also a political issue. It could be addressed by various protagonists such as political parties. Where do you see room for change in order to increase the amount entrepreneurs?

That would require another interview I am afraid as there are lots of areas where we, as a country or as a society, could improve in that matter. But let’s be honest: If you want to be an entrepreneur in the German speaking area you can be one. No excuses.

Our readers, especially this generation of students would certainly appreciate if you could persuade them. Why should they take the risk, make themselves independent and pursue their own business idea, like selling customizable cereal online as you did back in 2007?

Simple: because it will make you truly happy to follow your dreams. Even if you fail.