On 24th November, Switzerland must reach a ground-breaking decision. With their 1:12 initiative, the Young Socialists are pushing for a radical paradigm shift. In future, the state would dictate the rates of pay in companies. At present, salaries in Switzerland are negotiated between employers, employees and unions. This social partnership is not an arrangement that has arisen by chance but has proved itself and became established over the last 100 years. It is based on a very basic Swiss principle: decisions are best made by the people involved, rather than dictated by a centralist state. After all, it is the people who bear ultimate responsibility. They know the circumstances in their companies and industries far better than the state. This is exactly why our country is also committed to federalism, with strong cantons and local municipalities. In this context, it soon becomes clear that on 24th November, there is much more on stake on than just certain pay structures in specific companies. It is a matter of principle: Who is responsible for defining pay in Switzerland? Employers and employees or the state?

The consequences of this deeply un-Swiss pay-diktat by the state extend way beyond purely political considerations. The 1:12 initiative has far-reaching implications for everyone in Switzerland.

At the moment, employees with the highest incomes are providing an above-average contribution to the state’s tax and social security revenue. That is the political intention and rightly so, for after all, the strongest shoulders should bear more than weaker ones. According to calculations by the Federal Tax Office, the 10 percent taxpayers with the highest salaries account for over 75 percent of total direct federal tax revenue (see chart). For social security, the picture is similar. 20 percent of all contributors account for 70 percent of the total income. This redistribution of resources is one reason why pay inequality in Switzerland is below average compared to other OECD countries. It decreased even further in recent years (as the Federal Council points out in its recommendation on the vote).

Taxes in Switzerland: who pays how much?

Hence, it is only logical to expect tax losses and social security revenue should the state now intervene with a diktat on high salaries. Various studies have tried to quantify these effects. In one of these studies, the University of St. Gallen elaborated numerous scenarios. They took account of pay ceilings set at various levels and the possible reactions of companies should the 1:12 initiative be adopted. Depending on the scenario, the study by Professor Christian Keuschnigg quantifies the loss in direct federal tax revenue up to 1.5 billion Swiss francs. There would be further losses in cantons and local municipalities. With regards to social security contributions, the deficit could be as high as 2.5 billion Swiss francs. One could argue for hours about scenarios and assumptions that have been done. However, in view of the above facts, no-one can seriously doubt that tax and social security revenue would decline should the 1:12 initiative be adopted on 24 November. This would cause severe restrictions on redistribution of resources through the tax system – exactly what the Left has always been demanding. Someone will have to fill these financial gaps. That is why the 1:12 initiative directly affects the middle class as well as small and medium-sized companies. If there is a Yes vote on 24th November, it is their taxes and social security contributions which would rise.

More bureaucracy for companies in Switzerland

For this reason numerous representatives of SMEs in Switzerland are speaking out against the Young Socialists’ initiative. Besides higher taxes and AHV contributions, they are mainly fearing increasing bureaucracy. They know, the story does not end with just an abstract article in the Constitution. How 1:12 be implemented precisely, still needs to be worked out. But one thing is clear: Should the state be dictating pay, it would also have to monitor it. Since the initiative not only affects salaries but also all types of benefits, the time and effort required to monitor it will be huge indeed. Furthermore, the proposers of the initiative themselves have recently determined that the 1:12 pay ratio would be based on hourly rate. One can only imagine the bureaucratic effort and cost entailed if all senior managers had to record their working hours in detail. And, incidentally, one could also ask: would the state have to check whether the hours claimed have actually been worked?

Pressure on pay at all levels

When people talk about 1:12, the debate is normally about the highest salaries only. For anyone familiar with the complexity of pay scales in companies, such a debate is obviously too limited. Pay scales are always a reflection of roles, responsibilities, training and experience of the employees. Hence, it is a fallacy to think that only the highest salaries will be affected by 1:12. If the boss is suddenly earning much less, it will inevitably affect all salary levels below him. Step by step, the downward pressure on pay would increase. Even for those on the very lowest pay level, the initiative will have harmful side effects. This is because 1:12 would result in more jobs being outsourced or downsized, in order to comply with the rigid state rules on pay.

Switzerland is a success model

The 1:12 initiative would be a radical move away from the approach that has so far been so successful for Switzerland. Hardly any other country in the world has weathered the economic crisis as well as Switzerland. We are envied for our record low unemployment rate of 3 percent. While the number of people in paid work was decreasing in the EU, new jobs were being created in Switzerland. Our living standard is among the highest in the world, incomes are far more equally distributed than average and our national debt level is very low. For the last five years, Switzerland has been ranking number one in the WEF World Competitiveness Report.

Switzerland’s model for success in figures

Comparison of unemployment, debt and GDP per capita

However, we should not let ourselves be deceived by this top position. Economic success is not God-given but the result of favourable prevailing circumstances and smart political decisions. Only these aspects can prepare a fertile ground for successful long-term investment and innovation. Switzerland’s advantages as a place of business are appreciated both by SMEs and global companies. In particular, they include a liberal labour market, an attractive tax system, open markets, entrepreneurial freedom, extremely highly trained experts and an environment that supports innovation. The fruitful mixture of small, medium-sized and large companies is another strength of our country. With 1:12, we would give up one of the key factors of Switzerland’s success: its liberal labour market. One only has to look at our neighbour, France, to understand the fatal consequences of an over-regulated job market. In France, the unemployment rate is over 10 percent. Many companies do not even create new jobs, when times are good.

How would companies react?

A company’s decision where to establish itself depends on many different factors. At present, Switzerland is in a very strong position and in recent years has seen a big influx of new companies. The circumstances described above have all contributed to this favourable situation. Hence, anything that has a detrimental effect on them is a step backwards. Sooner or later, we would no longer be able to persist in this global competition of places of business. What happens when the state massively intervenes in the economy can currently be seen in France. Countless high-income employees are leaving the country – the same thing could happen in Switzerland.

That is why the alliance against the initiative is broader than on virtually any other proposal. The Federal Council, Parliament and cantons, the SVP, FDP, CVP, BDP, glp, EVP and EDU, all say No. At the same time, also business federations and the employees’ association Angestellte Schweiz have decided to support the No campaign. They all say Yes to Switzerland’s success model and No to the Young Socialists’ 1:12 initiative. We should not let ourselves get involved in the dangerous 1:12 experiment – because there will be no victor in this no-win experiment. 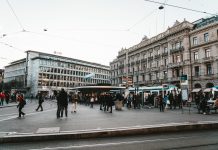 «The financial sector in Switzerland is healthy and well capitalised»

The Digital Transformation of the Bundeswehr

Humanitarian action in the next decade

“At Lombard Odier we believe the Sustainability Revolution will be the...